Patrick Thomas Canning is a freelance painter, illustrator, film maker and musician who lives in St. John's Newfoundland. Patrick grew up on a farm on the west coast of the province in a small isolated hamlet called The Highlands where his mother taught him how to draw and paint. He received his BFA in visual arts from Sir Wilfred Grenfell College and has continued his practice in a variety of fields both visual and otherwise, wherever opportunity or curiosity brought him. The majority of his visual work is non-representational (but not exclusively so) and is composed of compulsively rendered lines and shapes crowded together on a plane almost devoid of negative space. His paintings are vibrant, multi-colored tangles of competing forms in the general idea of a landscape and his drawings are usually juxtapositions of natural objects in a reverie of obsessive ornamentation. He creates out of a deeply felt personal necessity and believes art that fails to distract someone from their day to day lives is as useless as any other broken piece of furniture. 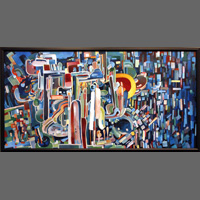 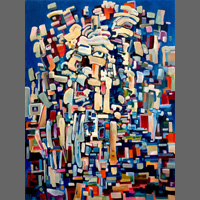